Thread By: meepmeep
Good afternoon everyone.

after my failure with an map, i started a bit smaller then i had in mind. I came across several bugs and redoing everything by step would fix the problems.. well, nope.

Let me show you the bugs.

( please note: on the end, i use the ppsh gun without the sounds. this is because the guns came from an download in 2016 with the points set on 5000 )

When the power is off, the revive perk glows and shines bright like a diamond. When power is on, the light is gone.

When drinking perk, the ''drinking effect'' is bugged

When using the zip line, the player model has its hands in the middle of the screen as well.

Perks doenst give sounds, even adding everything what was needed ( as described in the wiki here didn't worked. ) i only managed to fix the lighting ( but not for the revive perk )

Reply By: Harry Bo21
i saw someone finally give a definitive answer about this the other day finally


you need to do something to switch how it recognizes "." and "," apparently. There was a video on youtube but i cant find it now. That was it tho, some option in windows to swap those over then verify the tools - and then the guy said "it worked thanks"

Reply By: meepmeep
by ''verifying'' the mod tools encounters more problems. for some reason, even the l3akmod doenst want to work now.

meepmeep
by ''verifying'' the mod tools encounters more problems. for some reason, even the l3akmod doenst want to work now.

well obviously, it will have removed l3akmod

The code is still in the script, as well for the downloaded DLL.

"of course it broke l3akmod"

after verifying - which serves the very purpose of completely returning the files back to the original condition without any changes or mods ( like patched dlls... ) - you would need to re-install l3akmod

you can easily see this by linker no longer printing the l3akmod info when you link in the log printed in launcher...

Reply By: meepmeep
i already did that sir. i redownloaded the dll and placed it in the

folder as explained. I was already a step ahead with that.

ill redo every single step by first adding the perks and its script. ill update this post when i have more news.

i'm sorry if i dont understand what you are trying to say harry. but ya know me ofc.

Reply By: Harry Bo21
the scripts in your mod wont have changed, you dont need to waste your time on that

^ if l3akmod is installed, this appears when you link. If its not there - your DLL is "not" patched

Reply By: meepmeep
i got it working again indeed. after the verifying the files i replaced the dll. but today, it was not there anymore. readded it and it fixed itself.

The compiler is done. I'm going to check in game for a min but i think that some problems still might occur. ill drop here what the console says when compiling.

Back before you know it ^^

the bugs is still the same as explained at the start of the post. but, there is improvements :D

do you got that video for me harry? or wassnt you able to find it back?

Reply By: Harry Bo21
dunno why you call them player model issues

its a 1st person animation issue

dunno why its happening on the bottle, the zipline is custom tho so that "could" be a fuck up with install

may even be fucking up the zipline has somehow fucked up the bottle, dunno

cant find the video no, pretty sure it was a topic on ugx that i saw this on tho. and it was recent ( within the last week )

everything is as it should be. So, i went for some digging on the web and tried these things out.


so, after getting this error. i rechecked if i would get any error with the map i have been working on. Sadly, the sound doenst compile but a new error pops up.


So, then i thought. you know what, i'm adding those perks to the temporary map, adding its scripts and trying to use those zonefiles that are created and changing its name to mine. When added the perks, it gived the same error

Reply By: Harry Bo21
i already told you - youve broken you SCZ file

fix the typo youve obv made

Reply By: meepmeep
i have no mistyped content in it. As you provided in the demo how it should be placed, i placed in the ex-ext way as you described. 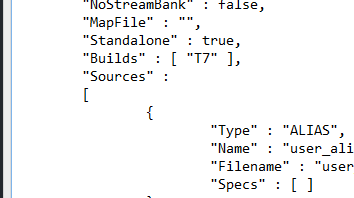 Reply By: meepmeep
omg, that's it. that was the problem maker. the sounds are working perfect. Now i can focus on the second problem. The player model when drinking soda/using zipline. ( as i thought it was called like that as a zombie would be for me called an NPC ( non playable character ) )

i was actually hoping that this would also be fixed as i didn't saw errors in the console. any clue how? thankyou in advance for so far, even with the terrible mistake i made with the script.

meepmeep
omg, that's it. that was the problem maker. the sounds are working perfect. Now i can focus on the second problem. The player model when drinking soda/using zipline. ( as i thought it was called like that as a zombie would be for me called an NPC ( non playable character ) ) i was actually hoping that this would also be fixed as i didn't saw errors in the console. any clue how? thankyou in advance for so far, even with the terrible mistake i made with the script.

firstly, i would argue those are not my perks, as you have no lights on quick revive ( with mine you 100% would )

if it is tho, go check these for errors or the little "missing asset" warning symbols and stuff

the zip line i dont know or care, no idea where it came from, but if its the one i think its a piece of shit anyway lol

1 - youd better not have "ignore errors" ticked in launcher

3 - did you at any point have shitdog's perks or shitegrenade's template installed to your mod tools?

4 - if those are my perks, every gsc / csc and gsh will have a version number at the top, tell me what version it is

Reply By: meepmeep
'' did you at any point have shitdog's perks or shitegrenade's template installed to your mod tools? ''

let we say.. how to delete those files cuz yes, i downloaded the ice tutorial ( which is broken in 100 ways )

can it be that that could be the trouble maker?


yes it most likely IS the cause


I bet you have duplicate animations

Reply By: meepmeep
heya there.

after checking the animation of drinking the perk, i found one that's not actually looking its drinking a perk but more wiggling around like its nothing. ( dont know if that would be normal :P )

i think that these aint need to sit here right? as your files are named diffrent then i have.

also, all perks are your perks. i am not going to combine them with some other if i dont know how that would be working. the revive is your perk. 
and ignore the preview


also, i can see there you still have shitdogs files installed


thats why i asked, i bet you have two copies of the anims, thats prob fucking shit up. Remove his piece of crap GDTs from your bo3 root completely

Sorry i didn't replied much these days. worked so hard, that my mind needed rest as the building stress was pilling up. ( been sick )

in the meanwhile, i cleaned as much as possible. As far i know, there wont be any junk left.

Back to the model drinking problem. I have managed to delete 2 files who would look for me that it was the trouble maker. For example, wardog seems to be using an overwrite script as well for ice who actually added your tomahawk in his broken zm theme.

as i found the t7 stuff you provided in the screenshot, is there actually something missing. I rechecked with black ops 3 by verifying the files, added the l3akmod and changed the t6_weapons.gdt thingie with yours. ( if i wont do that, the console says that there is a double tombstone array as well in the model export as well in the assets. )

But, what do i miss? because even with verifying the files didn't worked out for me.

When checking in ape, this attach model is missing. With deleting several gdts made the map also doing some others things what i not did before. For example, it spawns me with one of the 4 chars in SOE. before that, it was only some bare cold 90% naked hands.

Reply By: Harry Bo21
the missing file is just for the preview in ape, its completely irrelevent

as for the rest, barely understood any of that

Theres nothing i can do about you having conflicting files

Reply By: meepmeep
i deleted the ''shitdog'' files and the '' iceshit'' files. after checking everything, i still having the same problem wtith the xanim drinking model thingie.

when adding your perks, the messege about the widow should be yes or no with the NONLOOPING command line on line 87. i found out that there was missing a '','' after editing this and saving it, it fixes itself and the compiler starts running.


and can be found in the perk_sounds.csv in the aliases folder.

as far for anything else, i haven't found anything that could inter fear with the arms. i'm out of options a.t.m


the missing texture is fixed. This was an texture what got missing after porting the map over from world at war. About the 2 stucts with no entity's on 19 and 21 are the intermission when the game is over.

Now, i saw your autograph.. could it be that i use craftD's prefabs for the guns on the walls with the 5000 points to buy? cuz i see u have a gun collection tho.. if so, i wont mind it to try it out ofc.

Reply By: meepmeep
an reply would be appreciated harry.

Found 2 errors with are both your files.

and the two errors you HAVE listed - are because you verified the tools, but did not REINSTALL my files after - creating duplicates... none of which matter in the slightest as the t6 tombstone bottle isnt used anyway

i also solved every single other issue you had

and your response is this? Good riddance you fucking jack ass