Enable to for platform

Thread By: KillJoyYT
is there an easy way to enable the player to ride with the platform whilst the platform is moving? I know ct has a script for moving players with entities but that is far too much for what im looking for... thank you

Reply By: Abnormal202
by "ride" do you mean like lock the player down to it like in a vehicle? if so you can use:

otherwise, players can normally walk on moving platforms alright, so I'm not sure what you're talking about.

I will check this out thank you

Reply By: KillJoyYT
now I just feel like a complete idiot lol

I've tried adding a clip ai where my platform stops but still the zombies ignore.. how do I fix this? dynamic pathing?


yupp that works :) thank you guys

not even trying to be offensive but literally ive scrolled up and down the entire API so many times - and just taken note of functions that look like they would be useful, and later searched using winrar through stock scripts for instances of them being used - or just tried them out myself

no-one seems to bother even trying to look through the information you are literally "given" with the tools, its silly really. People always say "some of us are not just - born scripters- harry" - well guess what? nor was I - i used the tools we were given to find it

I dunno what you guys think i am, but i have never - in my entire life - been on any kind of course or training to learn this shit, and only got in to cod modding like 4 years ago ( even i had no idea where to start when i first got involved, despite my previous experience in other languages )

and use the search - and type in keywords 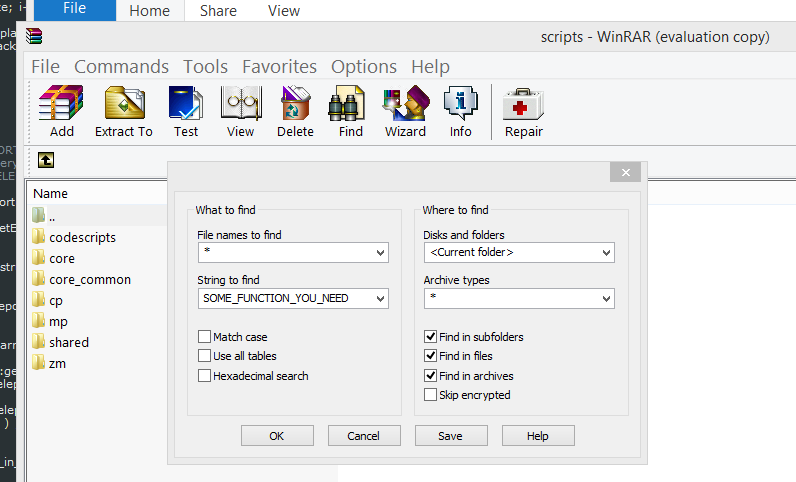 i think sublime even offers some batch file method to search multiple files - im sure your "lord icegrenade" will happily teach you how to use it, throw him another £300 for a gopro he hasnt bought and maybe hell pretend he knows what hes talking about and show you...

But what would i know, ive only been spoon feeding you all for 4 years for nothing Its pretty nice cause it lists every instance something is found, as well as some of the surrounding lines to give you more context of how its being used For anyone trying to figure out how to use an engine function, or where in the Treyarch scripts a certain function/variable/notify/etc. is used, I would recommend using this and searching in ROOT\share\raw\scripts for examples.

Reply By: KillJoyYT
thank you guys for all the help you have provided me and I need to start looking for more stuff on my own I know... problem is some of the time Idk where to look or if I do find something im not experienced enough to know how to use it. I really do appreciate all of the guidance though, I wouldn't know what I know without the help from you guys